Why We Feel Yelp Is In Optima Tax Relief’s Pocket 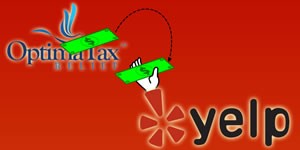 With an overwhelming number of unchallenged claims that Optima Tax Relief employees write the vast majority of Optima Tax Relief’s 5 star reviews, a full investigation was conducted into Yelp, among other so-called user review sites, by the U.S. Watchdogs.

HERE ARE THE FACTS Yelp and Optima Tax Relief don’t want you to see!

The facts they uncovered are presented here. The following was reprinted with permission in its entirety.

And if you think that SuperMoney’s reviews are any better, you should know that SuperMoney was founded by and is owned by the founder and owner of Optima Tax Relief, Jesse Stockwell, (who used to be known as Jesse E. Torres IV). See the full SuperMoney story: The Spin Machine

Reprinted from the U.S. Watchdogs: Is Yelp in Optima Tax Relief’s Pocket?

After our in-depth investigation into Yelp’s claim that “Advertisers get no special treatment“, our opinion is that Yelp’s credibility equals that of the Obama Administration: they both out and out lie.

Want to know the facts about Optima Tax Relief and its Founder, Jesse Stockwell, see: Wealth on the backs of Mexican Americans.

Yelp’s BIG LIE: We posted numerous reviews that meet Yelp’s posting standards and all were removed and hidden under the “Yelp not recommended section” where unsuspecting visitors, relying on Yelp, will most likely never see them, and where their ratings, generally 1 star, are removed from the total, thereby not reflecting the true rating of the company.

We posted over 30 negative reviews of the companies founded, owned and operated by Jesse Stockwell, who changed his name from Jesse E. Torres IV to allegedly hide from the bad press of R.I.C.O. charges filed against him and Debtmerica by his father.

Each of our reviews came from different users, different states and different accounts. Every one of them met or exceeded Yelp’s supposed standards, yet every one of them was removed and sent to Yelp’s Purgatory, their hidden, “Not recommended” section.

It gets worse: While we have to speculate here, we came to the conclusion that Yelp is reading emails between Yelp Members. Each and every Yelp account that we used to send a message through Yelp to other members was completely removed from Yelp. Was that a coincidence, or clear and undeniable evidence that Yelp is monitoring its users mail?

If you have to use Yelp, we recommend that you ignore their Yelp Recommended Reviews and go directly to the Yelp “Not Recommended Reviews”. The link is located at the bottom of the page, and be sure to click the “see all” link. Here you will see at least a few of the negative reviews on a company.

WARNING! Also note how many reviews have been completely removed, you can’t even see them. Did we mention that when Yelp removes an account, there is absolutely no mention of them or their reviews?

To those who have unjustly had Yelp hide or remove their reviews and ratings of Optima Tax Relief, please add them as comments here where real ratings will never be removed.

Be watching for the KloudKover Equalizer where those who did business with a company in reliance on Yelp’s claims, and were economically hurt, will be able to file a lawsuit against Yelp for damages.